Governor Bello Matawalle of Zamfara has briefed President Muhammadu Buhari on security developments and the activities of illegal miners.

He said that already over 31 foreign illegal miners have so far been repatriated from the state.

Matawalle made this known to State House Correspondents after he met behind closed doors with the president at the State House, Abuja.

The governor said 11 Chinese illegal miners and 20 others from Burkina Faso and Mali were repatriated to their respective countries.

He said: “I discussed the issue of illegal mining in my State with the President and he directed the office of the National Security Adviser to form a task force on illegal mining, which can go round the State to fish out these illegal miners.

“Most of them are not Nigerians but with the support of the Army, Police and other security agencies in the State, some of these people were apprehended and repatriated back to their countries.

“Eleven Chinese were repatriated and over 20 from Burkina Faso and Mali.

“And it’s because we have a porous border particularly between Zamfara, Sokoto and Katsina with the Niger Republic which people always use to come in.

“But measures are being taken by the Nigerian Immigration Service, I know they now use drones in some of these areas.

”I have a lot of confidence that will help check such infiltration and henceforth we may not have such foreign nationals coming into our country through the back door.”

The governor called on the federal government to take measures that would check the activities of illegal miners to harness the untapped mineral resources in States for the benefit both the central and state governments.

On security, the governor again condemned the recent killing of over 20 persons in Talata Mafara Local Government Area of the State by bandits.

He stated that he used the opportunity of his meeting with the president to demand additional presidential intervention to address the menace of bandits as well as strengthen security in the State.

“After the disbandment of the Special Anti-Robbery Squad, SARS, we had some challenges in Zamfara and particularly on Wednesday, about 20 people were killed in Talata Mafara Local Government.

“And what I solicited from the President was to see how we can be able to have more security personnel that will secure the territory of the State,” he said.

The Inspector-General of Police (IGP), Mohammed Adamu, has ordered the immediate mobilisation of all police operational assets and resources to bring to an end ... Read More

Barely 24 hours after a curfew was imposed on the state by Gov. Ben Ayade of Cross River, suspected hoodlums on Saturday broke into the ... Read More 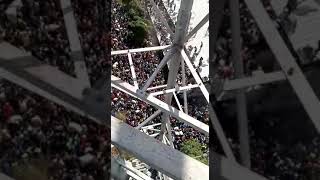 https://youtu.be/T5RgEjwR1i0 The video shows Jos resident carrying Covid-19 palliative meant for them, however, was not given out during the lockdown. Read More