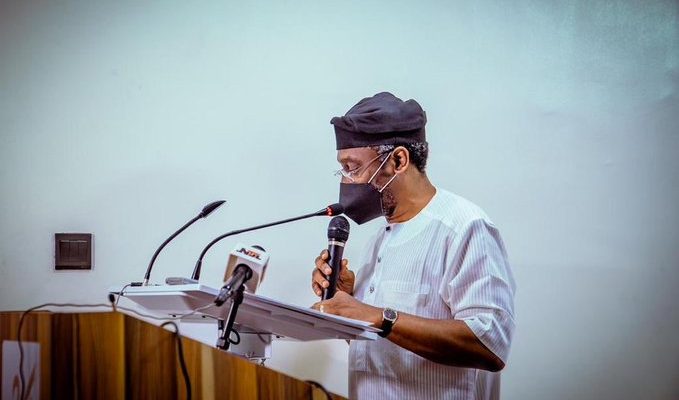 Mr Femi Gbajabiamila, the Speaker of the House of Representatives, said he is “personally distraught” over the killing of a newspaper vendor, Mr Ifeanyichukwu Elechi, by one of his security details.

Gbajabiamilia, who expressed his regret over the incident in a statement issued early on Friday, said that his “deepest sympathies” are with the family of the victim and all vendors in Abuja over the sad incident which occurred close to the Federal Secretariat on Thursday.

The speaker explained that the incident occurred when he stopped he convey to exchange pleasantries with the vendors as was his usual practice after work.

According to the fifth-term lawmaker, many of them have known me since I first moved to Abuja and it was a friendly exchange.

“Unfortunately, after the convoy set out in continuation of our movement, unidentified men obstructed the convoy which got the attention of security men in the convoy who shot into the air to disperse them.

“Some hours later, after getting to our destination, it was brought to my attention that someone was hit by a stray bullet, contrary to an earlier report by men in the convoy that they applied their security discretion to shoot in the air.

“My value for human life and my respect for all people, irrespective of social-economic status, is what endeared me to these vendors and these are the reasons why I stop my convoy quite often to connect with them.

“For one of them to have been shot by my security detail is horrific and I cannot begin to imagine the grief and loss Ifeanyi’s family must feel on this sad day. No family should have to go through this.

“I am personally distraught about this incident and my deepest sympathies go to the victim, his family, and all Abuja vendors,” he said.

He said that the matter has been reported to the local police station and an investigation has commenced.

Gbajabiamila, however, said that the officer who fired the fatal shot had been suspended from the convoy pending the conclusion of the investigation.

The sad incident occurred at a time when the House of Representatives is championing police reforms following the #EndSARS protest.

The house under the leadership of Gbababiamila insisted it would make laws and budgetary provisions to compensate victims of police brutality, affected officers and to hold police officers accountable for their actions.

In a swift reaction to the incident, the Abuja Newspapers Distributors Association (ANDA) said newspapers will not be shared until 10.a.m. on Friday in protest against the killing.

In a statement, the President of ANDA, Benji Obute, called on all members to converge at the distribution centre in Area 1, for a peaceful protest to draw the attention of the Speaker and the Inspector General of Police (IGP) to the incident.

“Sequel to the sad incident that happened this afternoon at the Federal Secretariat, which resulted in the death of one of us, Mr Ifeanyichukwu Elechi, a mass action will be carried out between the hours of 6 am and 10 am.

“A peaceful protest to call the attention of the Speaker of the House of Representatives, whose security detail fired the shot, and the IGP to the brutal murder will be staged within that period.

“By this arrangement, papers won’t be shared until 10 am, all distributors and vendors are to converge at Area 1 as no paper will be allowed on the streets until after the protest.

“Media Houses are enjoined to cooperate with us and ensure that no single paper is leaked out as any paper that defaults will be sanctioned. We must join hands to get justice for the fallen vendor,” he said.

A Nigerian youth has memorialized the shooting event at the Lekki tollgate area of Lagos during the #Endsars protest with a tattoo on his body. The ... Read More

Lagos State Governor, Babajide Sanwo-Olu has imposed a 24-hour curfew on the state to stem activities of hoodlums that have hijacked the #EndSARS peaceful protests. ... Read More

DJ Switch has broken her silence after Nigeria’s Minister for Information, Lai Mohammed accused her of giving out false information about the EndSARS protest. DJ ... Read More